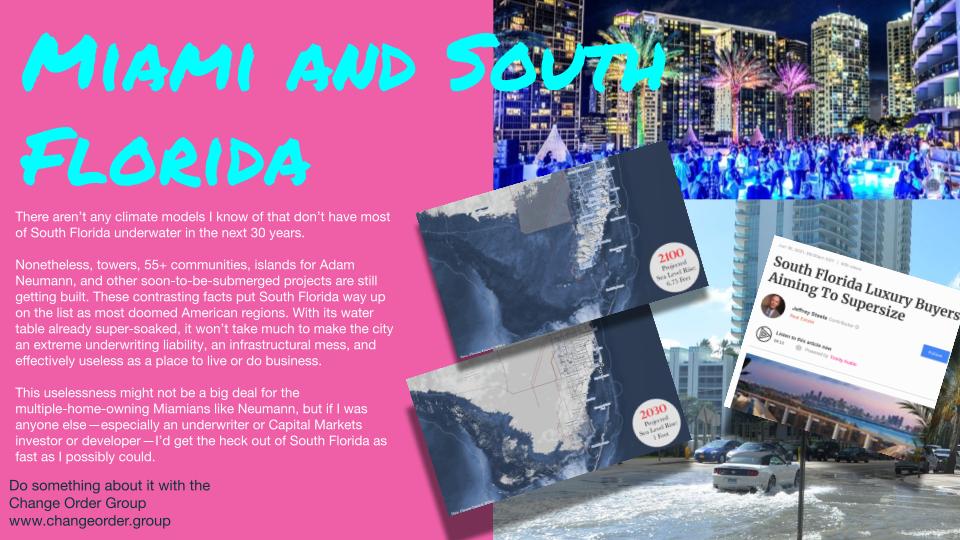 A couple years ago I attended a “Future of Real Estate” conference in Miami, Florida. Given what I knew about South Florida in the context of climate change and rising seas, I thought the city an odd location to be discussing the future of real estate. In a rare spell of discretion, I sat through the conference listening, waiting, and hoping there would be serious conversations about climate change and resilience, since Miami is ground zero for American real estate related climate impacts.

It started dawning on me then–and has been affirmed by the last three years of development trends–that there’s a collective, willful ignorance in the Capital Market real estate development, investment, and underwriting industries about risks brought on by present and future climate, economic, and social threats. It’s too much to comprehend. And the towers and homes being built in South Florida are not proof of a climate plan, but of investor hubris and/or ignorance.

I was reminded of this ignorance and hubris glancing at Sidewalk Labs latest exercise in Utopianism and rendering agility. Having blown it in Toronto, Sidewalk is now proposing a master-planned city in the Wynwood neighborhood of Miami. This project should not happen: Miami has started an inexorable path to becoming uninhabitable due to extreme heat, fresh-water shortages, and rising seas. The whole concept is ridiculous and deserves to be ridiculed.

With discretion burnt away by last year’s heat and forest fires, I thought I’d make some educated guesses as to which cities are most likely to fail under climate impacts.

The list is not definitive. It’s not exhaustive in its research or even complete (Texas deserves its own post). The list does not necessarily reflect the views of my colleagues and I welcome the opportunity to research the topic with greater rigor. But considering many of these cities are already hitting record-setting temperatures in 2021, and those temperatures are following multi-decade trends and projections, I’m feeling good about my guesses.

Given that none of the listed metros have made appropriately aggressive climate plans to deal with their respective climatic and social threats (jobs, poverty, climate protection for disenfranchised populations, etc.), and given that these metros, on balance, are moving closer to climate annihilation (promoting sprawl, consumer-based economic development, relying on dirty power), I see little hope for any of them to sustain millions of people for much longer…a few decades at most, for most. Some less.

In the best-worst-case, millions will move from these metros to climate havens before pandemonium breaks out. In the worst-worst case, pandemonium will break out, millions will scramble for shelter, food, and water, rendering billions of dollars of new and old properties worthless, closing fields and factories, destroying neighborhoods, and leaving lots of dead bodies.

And then there’s the third option, which is reversing the impacts of unsustainable real estate, economic, and population growth. That’s what the Change Order Group is up to. We will help you understand the data and make an appropriate, science-based plans leading to different, preferable outcomes to resource depletion and regular mass extinction events.

If you’re a real estate stakeholder who wants to be be prepared, the Change Order Group wants to give you good options in a really bad situation. Drop us a line to find out how!

The Change Order Group is a value-driven real-estate consultancy and development firm with a mission to ready the world’s built-environment for the environmental, economic, and social challenges of the 21st century and beyond.